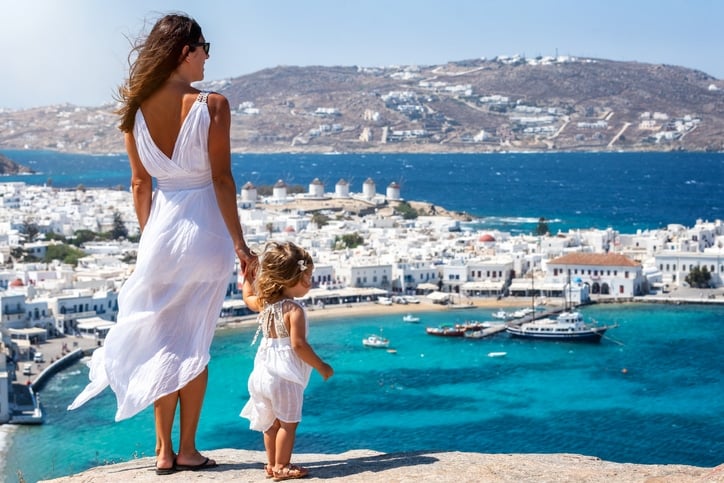 Greece is a beautiful country with rich history and ancient culture. Its influence can be seen in art, architecture, language, food, and even baby names. Greek names for girls like Penelope and Sophia are among the most popular baby names for girls, with unique ones like Anastasia and Calliope climbing their way up the charts. If you’re after a baby name that radiates strength, wisdom, and ancient charm, these girl names rooted in Greek mythology and nature may be exactly what you’re looking for. Read on for our list of 50 unique Greek names for girls.

You May Also Enjoy:  These Baby Girl Names Are So Ancient You've Probably Never Even Heard Them

Beautiful
If you think your little girl will be the best looking on the playground (duh), this might be the perfect name.

Whirlwind
Aella may sound sweet, but the name actually harkens to one of Hippolyte’s Amazons in Greek mythology who fought against Heracles. Still, pretty cool for a girl!

Food of the gods
In Greek mythology, ambrosia was considered the food or drink of the Gods thought to bring long life and immortality to anyone who consumed it. Ambrosia is both whimsical and ethereal. Better yet, there are tons of beautiful nicknames that can be derived from it, including Amma, Amber, or even Sia.

Unknown
There isn’t much information that can be found on this name, but it’s still one that stands out for its uniqueness.

She who fulfills her obligations
It’s one of those names that sound pretty to the ear and has a great meaning while still being totally unique.

Aura or breeze
Avra is the Goddess of breezes and cool air.  This light, breezy and sweet name will ensure your babe is nothing if not laid-back!

Daughter of Bris
Briseis is a significant character in Greek legends; during the Trojan War, she was captured by Achilles, who fell in love with her. This name is perfect for parents who love mythology or are just looking for a striking name for their little girl. Briseis is definitely eye-catching with a bit of flare. No kid in your child’s class will have this unique moniker, which is all the more reason to choose it.

Lark
Larks are cheerful and free, and naming a little girl Calandra might help her grow into a free-spirited woman.

Beauty
Calla has all the good qualities: it’s short, ancient, inspired by a beautiful flower, and it’s not too popular. Finding a name with all those qualities is not easy, not to mention its lovely meaning.

Beautiful voice
Calliope was the Greek Goddess of epic poetry and eloquence. If this baby has parents who love poetry, what could be better?

Bird
In Greek legend, Circe was a sorceress renowned for her vast knowledge of potions and herbs. This bold and edgy mythology name is worthy of your little girl.

Gentle
How gentle-sounding is the name Damara? It also coincidentally means just that: gentle!

Man destroyer
Deianira was a mortal princess in Greek mythology, and also a wife of the Greek hero Heracles. Famously, Deianira also unintentionally caused her husband’s death. Deianira is a lovely exotic Greek name with a fierce and strong meaning.

Born on the island of Delos
The Greek island of Delos was the home of Apollo and Artemis in Greek mythology. It was also an epithet of the moon goddess Artemis. A gorgeous girl’s name is also short and easy to pronounce.

Half
Demi has yet to emerge as a popular baby name, although we predict it will only be a matter of time before it comes into common use.

Well-spoken
Although it may sound more like a name for a grandmother than a newborn, vintage names are coming back in style, the name Effie is a short form of Euphemia; Euphemia was a Christian saint martyred for her faith in 303 AD.

Light
This perfectly appropriate name for the new little light in your life extends back to mythology. Eudora was one of the 50 sea-nymph daughters of the ‘Old Man of the Sea’ Nereus and the Oceanid Doris.

Well-spoken
Eulalia is a bit rare but truly unforgettable.

Earth mother
Gaia was the Greek goddess of the Earth and prophecy and is the personification of Mother Earth. Sounds perfect for the baby of a nature lover, right?

Milk white
Galatea was one of the fifty Nereides and the goddess of calm seas. The truly unusual baby girl name Galatea brings to mind peace and tranquility.

Hero
Hera, the wife of Zeus, was the Queen of the gods, goddess of marriage and birth. If you’re hoping your kid has a tremendous impact on the world, why not go ahead and name her Hera, suggesting the queen of the gods?

Hearth, fireside
The name of the Greek goddess of the hearth and home could also be an unusually cool baby girl name.

Wise
Ismena is a name that commands respect and attention and yet also a name that sounds pleasant on the ears.

Mythology name
In Greek mythology, Jocasta was the wife of King Laius of Thebes; she was also the mother of Oedipus, who she mistakenly married without realizing he was her son. Jocasta might not have the greatest legacy in terms of Greek mythology, but that doesn’t mean that this beautiful name can’t be reinvented in modern times.

Grace, beloved
With such beautiful meaning and sound, it’s hard to believe that the name Karissa isn’t more widely used.

Coral
Koralia, which means “coral,” is in the same family as names like Amethyst, Amber, and Pearl, although it seems much more exotic.

Happy
In Greek mythology, Leda was an Aetolian princess who became a Spartan queen. She is best known for being seduced by the god Zeus when he took the form of a swan.  Another Greek mythology name, this choice for a baby girl, has a cheerful and upbeat vibe.

Defender of men
This name is gorgeous and sounds like it would belong to a Greek goddess, and not to mention it has so many possibilities for cute nicknames.

To reflect, meditate or ponder
According to Greek legend Medea was a sorceress who helped Jason obtain the Golden Fleece from her father, King Aeetes of Colchis. This is a beautiful and quirky name worthy of your little goddess. Your Medea will undoubtedly have great inner strength and a vision all her own.

Ash-tree
In Greek mythology, Melia was the Melian-nymph of an ash tree and daughter of Okeanos. An ancient alternative to the more common Maya and Mila, we love how much personality this name has.

Myrrh
Myra is the mother of Adonis in Greek mythology. She was cursed by Aphrodite and transformed into a myrrh tree. Myra still flies under the radar, but this ancient Greek name is deserving of a comeback.

Water nymph
Naida in Greek mythology is one of the nymphs of flowing water—springs, rivers, fountains, lakes; so if you love the water, this might be a perfect tribute.

Fern
Niobe was a Queen of Thebes and famously the daughter of Tantalus; she is known for her tragic Greek myth of loss. You’ve likely heard of the name Naomi; Niobe is similar in sound but originates from Greek and means ‘fern,’ which gives it a beautiful connection to nature. It’s also an excellent option for parents who like the sound of the name Naomi but want something less popularized.

Goal
In Greek mythology, Nysa is the mountainous region where nymphs raised the young god Dionysus. Nyssa is perfect for a family who might want to tie their Greek heritage into their baby name (or love a name with a mythology meaning).

Wrathful
Odessa is the feminine version of Odysseus, a legendary hero in Greek mythology. Although it’s an unusual name, it has been rising in popularity over the last few years.

Claw, fingernail
We love the edginess that the ‘x’ gives this name. Its short spelling makes it right on trend while also giving it personality. Any little girl or boy with this name is sure to be a ball of energy.

Help
Ovelia is a great option for parents attracted to names like Ophelia or Olivia but want something more unique.

All gifts
Pandora was the first mortal woman in Greek mythology. She was used as an instrument in the wrath of Zeus to punish Prometheus. You’ve likely heard of this name; although it’s not common, you can bet it will stand the test of time, just like the legend.

Stone; rock
Although the name Petrina might seem pretentious, it’s actually a cute, pretty choice (along with the name Trina, which works as a nickname and stands on its own as baby’s full name).

Adaptable
The name sounds sweet, and it’s not common, and when one looks deeper and learns the name’s meaning, it gets even better.

Peaceful
Your little one will surely be calm, serene, and good to you with such a namesake.

A flowing stream
Rhea is a goddess in Greek mythology, the Titaness, daughter of the earth goddess Gaia and the mother of Zeus, Poseidon, Hades, Hera, Demeter, and Hestia. Rhea is a soft feminine name with a lot of power behind it like you hope your future daughter will be.

Sapphire
We love the old-fashioned vibe of this name, which is associated with a precious stone. It makes a cool alternative to the more popular gemstone names like Pearl and Ruby.

Moon
Selene was the Greek goddess of the moon who drove her chariot across the heavens. We love this name that embodies the soft power and mystery of the moon.

Flourishing
Thalia was the Muse of comedy and pastoral poetry and the Greek goddess of festivity and banquets, making this name fitting for a baby full of fun energy.

Place name
Thera is the ancient name of the island of Santorini and is also the name of the volcano which erupted on the island in the middle Bronze Age. Thera has a wonderfully natural, down-to-earth feel reminiscent of the beautiful Greek island.

Of the forest
The ‘x’ spelling helps make this edgy but soft name stand out more without sacrificing its femininity or sophistication.

West wind
Your baby girl will surely grow into a brave and confident young woman with a name as distinct as this one.

Life
The name translates to “life,” which would be a lovely nod to the new life you’re bringing into the world with the addition of your little one.

You May Also Enjoy:  47 Rare Italian Names for Girls You Haven't Heard 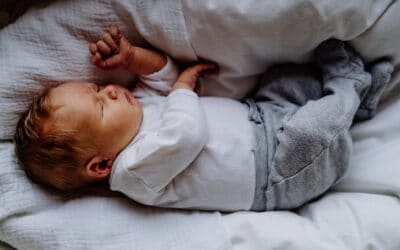 20 Unique and Unexpected Names for Boys 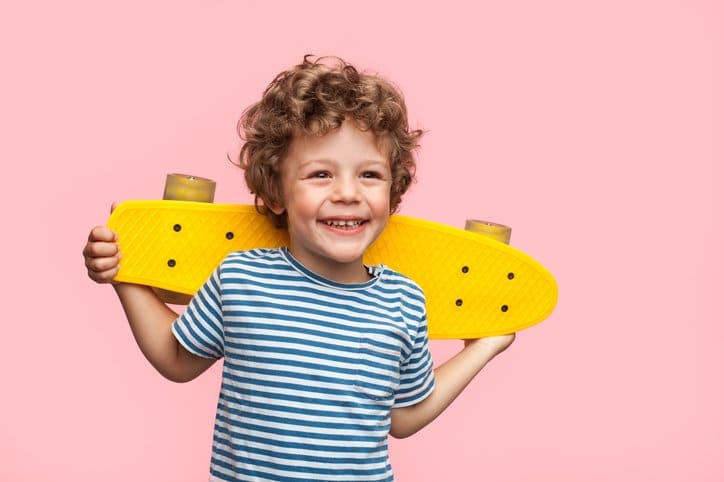 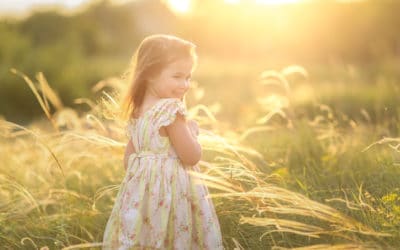 50 Southern Baby Names That Are Charming and Timeless 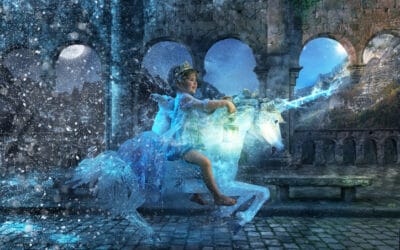 Rare Magical and Enchanting Baby Names No One Else will Have