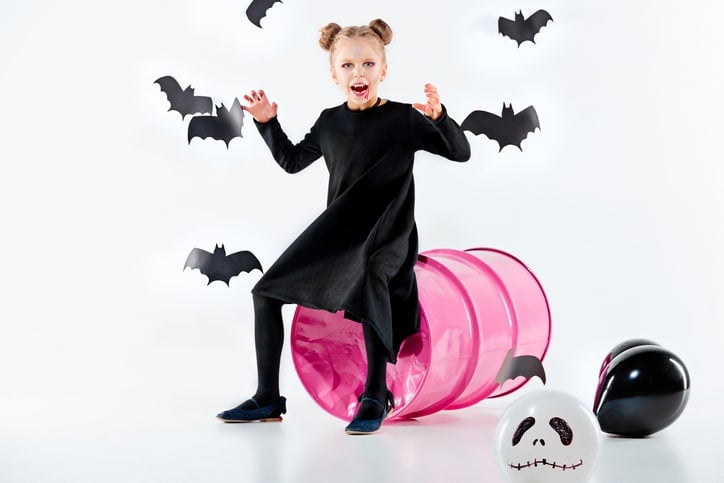 Goth is a culture that combines romanticism with horror, so if the gothic culture interests you, you may choose a baby name with ties to the darker side. There are no rules that say your baby’s name has to be cute and sunshine, or even conventional. While these names are dark and spooky, they are still appropriate for the playground and have just the right amount of edge to let your kid stand out. Whether your dead set on a goth name for your little one or just curious, these 60 Goth name ideas and the meanings behind them will surely conjure up the mysterious and beautiful dark side.

Aradia is a supernatural figure in Italian folklore known as the queen of the witches and the moon’s Goddess. In 1899, American folklorist Charles Godfrey Leyland compiled a book called Aradia, or the Gospel of Witches; this book became influential in Wicca’s development. We’re not sure about you, but this name is giving us major gothy witch vibes.

This gorgeous melodic-sounding name hides a darker meaning — as Asura or asuras are known as demons in Hindu mythology.

A dark and spooky name that means “born in a time of grief,” according to Swahili.

Belinda has two different origins; one is coined from the Italian bella, meaning “beautiful,” the second gothier one comes from the Old High German name Betlinde, which possibly meant “bright serpent.”

In ancient Roman legend, Bellona was the Goddess of war. Dramatic and powerful, Bellona conjures visions of dark goddesses and queens.

The name Branwen is just like its meaning, dark and beautiful, is derived from Welsh bran “raven” and gwen “fair, white, blessed.”

A dark sky with a full moon is always intriguing and mysterious, much like the name Chandra, which means the “moon” in Sanskrit.

If you’re looking for a name that’s more unusual than Circe is a fitting choice. According to Greek mythology, Circe was a witch and a sorceress who turned men into animals using her magic.

Crimson is one of the gothiest colors that isn’t black, described often as a rich, dark red color, similar to that of blood.

This name has a romantic gothic allure to it, and if it sounds familiar, it’s because it was the name of a character from the sitcom Bewitched. Taken from the name of a biblical sorceress, the Witch of Endor, in 1 Samuel 28.

Gehenna definitely gives off dark and gothic vibes, which is fitting as its origins are undoubtedly creepy. According to the New Testament, Gehenna represents Hell, a state or place of torment and pain.

This lovely name means “fireside” or “star” and is rich in Greek mythology.

Ianira might just be the perfect moniker for your own adorable little goth goddess. It’s a name of Old Greek origin meaning “enchantress.”

Kali is such a sweet-sounding name, but its origin may surprise you. In Hindu mythology Kali is a highly feared Hindu goddess; Sanskrit for ‘the black one‘ Kali is the Hindu Goddess of destruction.

Kalma was the Goddess of death and decay in Finnish mythology; her name translates to “the stench of corpses.” Her favorite places to linger are graveyards and cemeteries; it doesn’t get any more goth than that.

Lethia exudes a sense of secrecy and mystery and symbolizes “sweet oblivion” in Greek.

Lilith is derived from the Akkadian word lilitu, meaning “of the night.” She is often considered a succubus or a vampire and sometimes is referred to as a champion of feminism.

This Arabic name means “darkness before midnight.” It has a softness and solemnity making it very fitting for a goth name.

Lycia is a Greek name meaning “wolf.” In Greek mythology wolfs act as divine messengers of the gods.

A dark and moody name that means “moon” in Native American.

The name Morrigan means “phantom queen” and is of Irish origin. In Irish mythology, she represents doom, death, or victory in battle.

In Roman mythology, Naenia is ‘the goddess of funerals,’ which sounds pretty goth to us.

If you’re looking for a name that has strength, beauty, and power attached to it, this gorgeously dark moniker might just be perfect for you. In Native American, Orenda means spiritual force that stands for “magical power.”

Ostara is a pagan and Wiccan holiday celebrating the spring equinox; that said, it is the perfect name for a gothy Aries baby.

Derived from French, Solanine is the poisonous substance found in nightshade, making it an intriguingly haunting name.

Tristessa is a Latin name that means “sorrows,” the title has an Old World flair, perfect for a modern, gothic family.

Umbra could be an amazingly spooky baby girl’s name. It means “shade, shadow” and is derived from Latin origins.

The name Vespera has a beautiful dark ring to it, which gives way to the meaning “of the evening” from Latin origins.

A name certainly fitting for a goth, Wanette means “the pale one” and is of Old English origin.

The name Xylia means “from the forest” and is of Greek origin. Anything dark gives off a gothic vibe, and there’s nothing darker than eerie woods.

The name comes from ancient Germanic ansuz, meaning “heathen god.” Ansuz was one of the deities in Germanic paganism. It’s perfectly fitting for a family who wants to find a Pagan connection for their little bundle of joy.

As a given name, Athan has an exquisitely somber feel to it. Derived from Greek origins, it means “immortal.”

In Hebrew, Azrael translates to “angel of God“; however, Azreal is also known as the angel of death.

Brander is a modern spelling of the Old Norse name Brandr, meaning “sword of fire.” This ancient name is both catchy and powerful.

We love a short and sweet name with a connection with darkness. Briar is an English word that means “thorn.”

If you want a slightly different moniker for your gothy baby, go with Brone. Brone is a boy’s name of Irish origin, meaning “sorrowful.”

If you’re looking for a beautiful Gothic baby name that also denotes determination and longevity, this might be for you. Carden comes from Anglo-Norman French cardon, meaning “thistle.”

Coven is one uniquely witchy dark name for a boy. A coven is an assembly of witches.

Davorin is a name with an air of passion and courage; according to Slavic mythology, Davorin is a war god.

Draven is from the Old English word draefend, which means “hunter.” Draven was a character from the goth movie The Crow, played by Brandon Lee. Sounds kind of like raven, no?

Hades is the dark god of the underworld in Greek mythology; however, Hades was considered non-evil and of a giving nature. This edgy and unique name and would make an excellent goth name for a little boy.

Hallow is a word meaning sacred or holy and is the root word for Halloween. This name might be a fitting choice for a baby born on or near October 31st.

Ingram means “the son of the raven or Ing’s raven” in German. According to myth, the raven is thought to move between the world of the living and the dead. You can’t get much more goth than that.

Kyran is an Irish name that means “black.” An obviously favorite color choice among goths.

We love the gothic coolness of this name, which we associate with the awakening of the dead. Lazarus is a boy’s name of Greek origin meaning “God is my helper.”

This sophisticated, dignified name has a gothy quality to it; it’s easy to imagine a Leviathan inhabiting a dark manor. In the Bible, Leviathan is a sea monster of Hebrew/Israeli origin, meaning “twisted, coiled.”

Lucien and Lucifer are both derived the same root lux (light) on the upside; they both translate to “bearer of light.”

Nocturne has goth written all over it. A nocturne is usually a musical composition that is inspired by, or evocative of, the night.

Noir literally translates to the word “black” in French. It has just the right balance of chic and darkness.

Here’s another sinister and spooky goth name for your baby, Osiris is God of the dead in Egyptian mythology.

Orlock is a modern invented name reminiscent of Warlock, a male who practices witchcraft.

This beautiful, often black gemstone is derived from the Greek onyx, which originally meant “claw, fingernail.” Black onyx is ultimately known to be a protective stone that absorbs negative energies.

An English name meaning “of the raven meadow.” The raven bird is often associated with goth-like connotations and is also a poem by the king of dark poetry, Edgar Allen Poe.

Salem is a Hebrew name meaning “peaceful, complete.” However, the title is most famously associated with Salem, Massachusetts, where the Salem Witch Trials were held. If you’re looking for a gothy witchy name that packs a profound punch, Salem is a great choice.

Not to be confused with Samuel, Samael is a Hebrew name meaning “venom or poison of god.” According to Jewish myth, Samael is the Prince of Darkness. He is a fallen angel, a chief seducer, accuser, and destroyer. He is often presumed to be the serpent who tempted Eve to eat the forbidden fruit.

Thanatus has a seldom-heard kind of intrigue but this beautiful and enigmatic moniker also literally means “death.” In Greek mythology, he is widely considered a god of death.

This cool name has just the right amount of edgy weirdness to it. In legend and folklore, vervain or verbena is considered a magical and sacred herb.

If you’re looking to evoke power with a menacing or scary-sounding baby name, then Zagan may fit the bill. He is one of the fallen angels, who first appears as a bull with griffin wings, and then as a man.

You May Also Enjoy:  Rare Magical and Enchanting Baby Names No One Else will Have 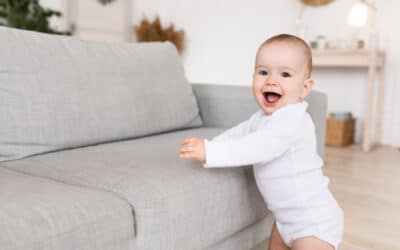 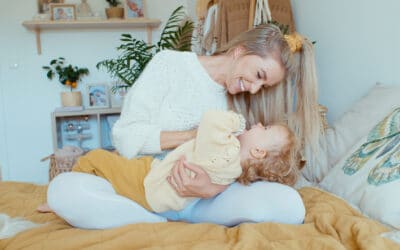 60 Unusual Girl Names No One Else Will Have 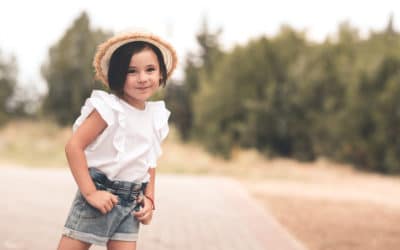 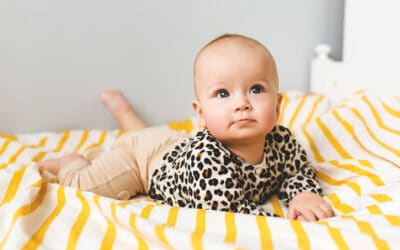